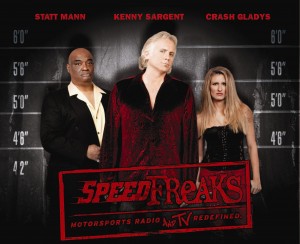 For president and founder Kenny Sargent, SpeedFreaks came out of an all night vigil at the computer. Frustrated by what he continued to see in motorsports coverage, The Sarge decided to embark on a journey that would take a year and a half to complete. After tireless meetings, “maybes” and “let’s wait and sees,” his bitchin’ dream came alive. SpeedFreaks began it’s assault on the airwaves of Los Angeles and the Internet June 25th, 2000. And let’s just say, the rest is his story.

Your right, it is now my story. So, as the Christmas tree lands on green, allow me to ram my Puma through the floor and tell it like it is. SpeedFreaks is a lethal combination of motorsports commentary and entertainment. To say this combo is lacking in today’s motorsports media coverage would be a colossal understatement. The way we as fans look at motorsports has changed as much as the sport’s technology, speeds and technique. Therefore, with this evolution, one would think the entities covering motorsports would do the same. No, and I won’t even expound.

So, with this refusal to come of age, I, like a lot of you, became bored to Texas Tears with what I was witnessing. I wanted motorsports coverage like the “F’n Outlaw” it is! From NASCAR’s Junior “Moonshine” Johnson outrunning The Law to Andretti giving the finger to the F-1 elitists, to Import Drags Adam Saruwatari’s world record quarter-mile run to FMX’s Seth Enslow and his ass crushing record jump of 226 feet. Now those boys exude ‘tude in the sport! And I do mean sport! Don’t let any half-wit tell you it is not. As Webster’s puts it, a sport is competition which “requires bodily exertion.” Tell me that Jeremy McGrath doesn’t “exert” his finely tuned human frame 30 feet in the air clearing triples or John Force doesn’t ooze the substance as he man handles his Hot Rod at 320 MPH! Motorsports is the original Extreme sport!

So, I, along with Statt Mann Caruthers, Lugg Nuttz, and Crash Gladys are on a journey and we ask you to hop in the Freakin’ back seat. As an honorary SpeedFreak, you’ll help the Mod Squad of Motorsports sit atop the Motorsports empire for a long, long time. And then, and only then will we realize, when all is said and done, it comes down to the B’s…babes, beers, and a bitchin’ buggy…ya dig?

“Get in the pit and try to love someone”